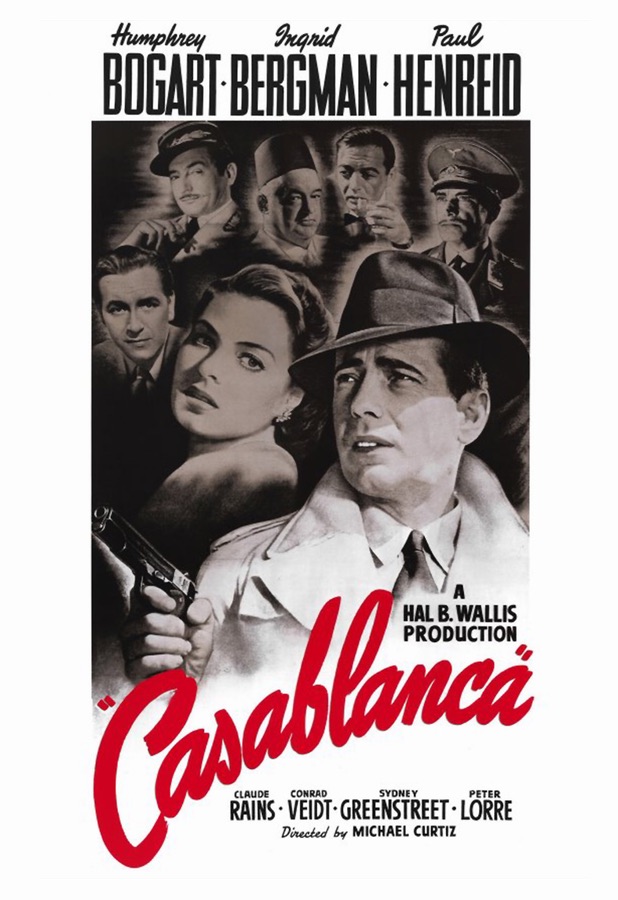 Casablanca (1942) is an American romantic drama film directed by Michael Curtiz and based on Murray Burnett and Joan Alison's unproduced stage play Everybody Comes to Rick's. The film stars Humphrey Bogart, Ingrid Bergman, and Paul Henreid; it also features Claude Rains, Conrad Veidt, Sydney Greenstreet, Peter Lorre, and Dooley Wilson. Set during World War II, it focuses on an American expatriate who must choose between his love for a woman and helping her Czech Resistance leader husband escape the Vichy-controlled city of Casablanca to continue his fight against the Nazis.

“Curtiz's film is a classic for a reason -- it's crafted with the precision, detail and beauty of a Fabergé egg; the dialogue is hauntingly memorable and, in Humphrey Bogart and Ingrid Bergman, it has one of the most magnetic screen pairings in history.” — UK Times

“The reason Casablanca endures is that it's a timeless love story wrapped inside a gripping wartime thriller, written with such wit and meaning that it's still quoted (and misquoted) decades later.” — Radio Times

“Nobody lights a torch like Ingrid Bergman's Ilsa or carries one like Humphrey Bogart's Rick.” — Chicago Tribune