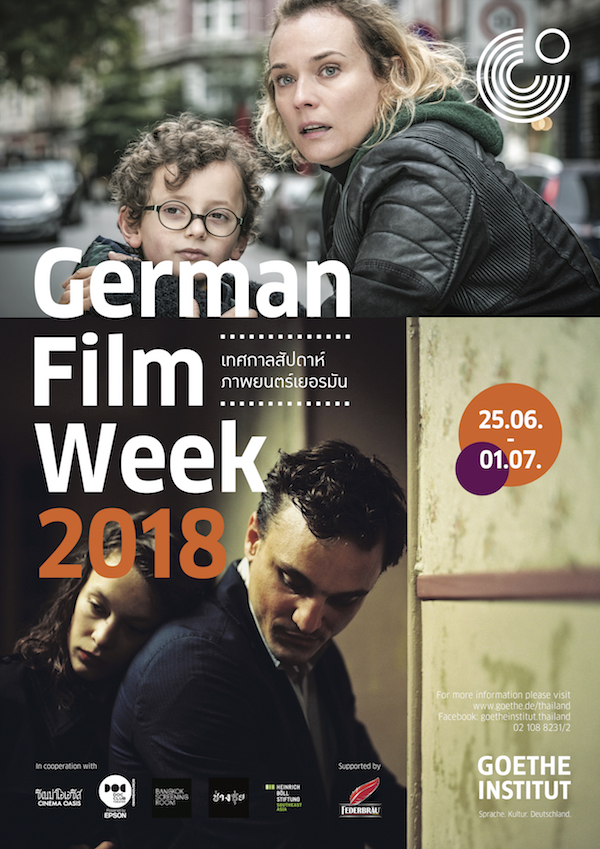 This year, the German Film Week once again brings a taste of the best of modern German cinema to our Bangkok audience. All the films have been screened at important festivals and showered with awards. Some of the movies to look forward to include “In the Fade”/“Aus dem Nichts“ ( Cannes Film Festival), “Western“ ( Cannes Filmfestival ), “Transit“ (Berlinale), “Beuys“ ( Berlinale) and “Happy“ ( Dokfest Leipzig).

This year the films will be screened in small, independent cinemas rather than in large Multiplex cinemas, creating more of a festival atmosphere and meeting place for film-lovers. Along with the films, this year, the post-screening chats and discussions in pleasant surroundings come to the fore.

We are fortunate to have the Bangkok Screening Room, the Oasis Cinema, Chang Chui and the Doc-Club Theatre in Warehouse 30 as partners. The auditorium of the Goethe-Institut will also serve as a screening venue during the Film Week.

For the very first time, a series of documentary films will be screened in the evenings during the Film Week. Films, such as the Thai-German love story “Happy“, the portrait of the artist Joseph Beuys “ Beuys“ or the refugee tragedy “When Paul came over the Sea“, all give powerful accounts of remarkable real-life experiences. Don’t miss the chance to see these documentary masterpieces.

We look forward to introducing you to the world of German cinema and hope that together we can enjoy a week of interesting discussions on the topic of modern cinema “made in Germany”!

A Hole in the World

In this contemporary film, director Dirk Kummer takes his viewers on a journey into divided Germany, processing his own youth which he spent in the GDR. "Sugar Sand" tells the story of two ten-year-olds, Fred and Jonas, who grow up together in the GDR close to the border. Their carefree everyday life in Falkenwerder comes to a sudden end when Jonas' mother Olivia decides to emigrate to the west. The exit application immediately brands the single mother and her son enemies of the state and Fred is therefore required to break off all contact with them. Without further ado, the two friends devise a plan: their idea is to dig a secret tunnel to Australia where they can be reunited. When the time comes for Jonas to leave, he manages to tear himself away from his mother and run away. The two boys are determined to save their friendship.

Sonja Maria Kröner's debut feature film “The Garden” ("Sommerhäuser") is an episodic narrative about the summer of 1976. In her film, the director unites three generations in a large garden. In the summer of 1976, the extended family have their annual get-together in the idyllic setting of grandma Sophie's garden which surrounds their summer houses. But this summer things are different: Grandma Sophie's death, the big tree which has fallen down in her garden and the disappearance of a little girl from the neighborhood, all seem to be bad omens.

While the kids chase wasps, seek adventure and argue about who is allowed to climb into the tree house, the mood amongst the adults darkens. Conflicts emerge which are not merely related to their inheritance or the selling of the garden. Long pent-up anger and frustrations come to the fore. As the tension gradually eases, no one suspects what lies ahead.

Performance artist, sculptor, graphic artist, art theorist and professor, Joseph Beuys (1921–1986) was considered one of the most controversial and influential artists of the 20th century. His work was both provocative and accusatory. He created a new, liberating expansion of what art could be, which included its role in the political shaping of society.

Andres Veiel’s portrayal of the pugnacious Beuys involved tracking down and using hitherto untapped audio and visual sources. Although it is a journey back in time, Beuys’ message is now more relevant than ever. In his documentary film, Veiel lets the artist take the stage and do the talking.

Made with a nonprofessional cast, the title of the film itself conjures up images of myths and a stereotype film genre. It tells of a group of German construction workers who are sent to work on a EU infrastructure project in a small Bulgarian village near the Greek border. Their task is to build a hydroelectric power plant. Unfortunately, the villagers are not aware that this will entail diverting the river. But preparation of the project is poor and the construction work quickly grinds to a halt. The challenging wild landscape awakens not only the men’s spirit of adventure but also their prejudices. In their free time, they socialize with the locals but are largely mistrusted by them. Water scarcity in the region is exacerbated by the diversion of the river and adds to the tension. In the years that follow, heated confrontation arises between the site manager Vincent and his colleague Meinhard. The village becomes a stage on which the two men compete for the recognition and favour of the villagers.