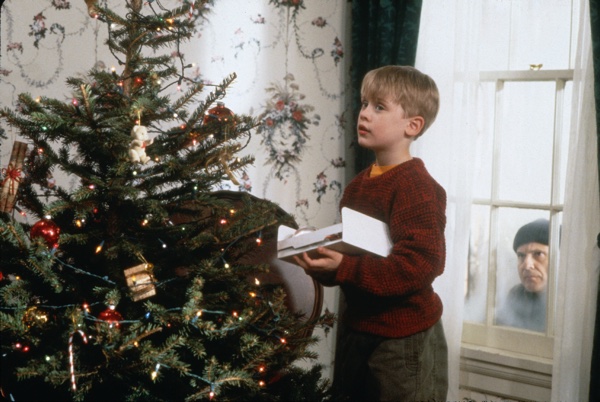 Little Kevin McCallister (played by Macaulay Culkin) isn't expecting someone other than Santa Claus down his chimney. When Kevin's family rush off on a holiday trip to Paris three days before Christmas, they accidentally leave the youngster behind to deck the halls all by himself — not with boughs of holly, but with a barrage of booby traps to keep out a bumbling pair of house burglars, Harry (Joe Pesci) and Marv (Daniel Stern) who have discovered that this tough little tyke is home alone when they case his house for a robbery.

Once little Kevin comes to terms with his scary reality, that his family is really gone (something he wished for in a fit of anger the previous night), he must fend for himself in the everyday chores of housekeeping.

His mother, (Catherine O'Hara) sitting aboard a plane halfway over the Atlantic, is sure that the family forgot something in their mad dash for the airport. When she finally discovers that it was her youngest child, she frantically attempts to get back to Chicago after she fails to reach him by phone from Paris.

While home alone, the precocious child detects a plot by two dimwitted thieves to steal the family valuables. With no one else to help, he cleverly rigs his house with an assortment of ambushes to foil their repeated attempts at breaking in, until his family returns.

In HOME ALONE 2: LOST IN NEW YORK, the hilarious sequel to Home Alone, Kevin McCallister (Macaulay Culkin) is back, and this time his playground is New York City. Separated from the rest of his family — who are on vacation in Florida — Kevin uses his father's credit card to have a grand "Big Apple" time!

Soon, though, Kevin discovers that the robbers he foiled once before are out of prison, in New York, and planning a huge toy store heist. Kevin sets out to deter them again, only this time the robbers are equally as determined — to make sure Kevin is killed!