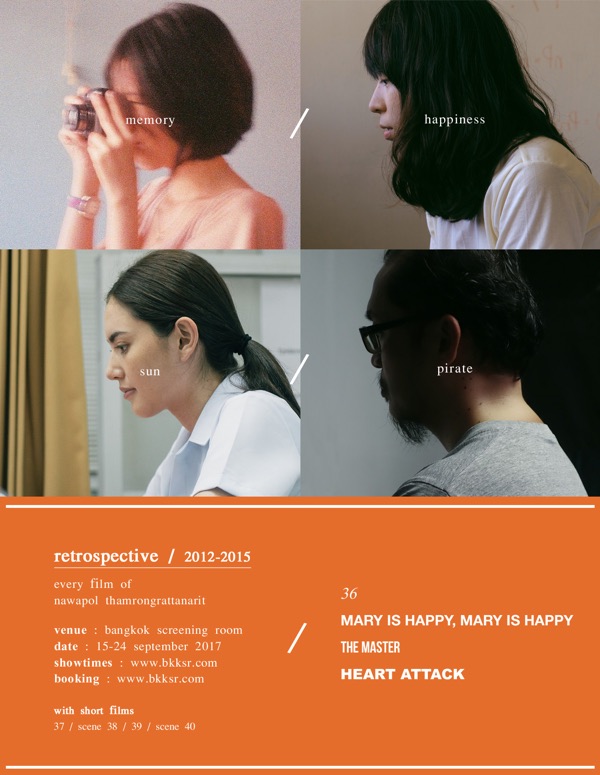 BKKSR is pleased to present the first complete retrospective of acclaimed Thai filmmaker, Nawapol Thamrongrattanarit. Featuring all four feature films, including 36, Mary is Happy, Mary is Happy, the documentary The Master, and Freelance.

Winner of the 2012 New Currents award at Busan International Film Festival in 2012, Nawapol is a visual artist, writer and filmmaker.

Screening with each feature film, is a different short film from Nawapol, including Scene 38 (2017), in it’s Thailand premiere.

Part of this special retrospective is an exclusive director Q&A with Nawapol on Sunday 17 September, 4.15pm after the screening of 36. (Sold Out)

The story about fragile love and digital memory recorded on the lost photo.

2013, 127 mins
Short: 39 (5 mins)
A cheerful title for a playful, jittery film. The story of schoolgirl Mary
jumps around all over the place, because the filmmaker based the
story on tweets by a real young teenage girl. Confused, but incredibly
witty, fun and very freely acted. A Twitter comedy.

2014, documentary, 80 mins
Short: Scene 38 (7 mins)
a documentary about 'van vdo' , the vhs shop in 1990s
the shop established the independent cinema scene for
thai audience by selling vhs of indie american, european, asian films.
however, all of them is pirate and illegal.

2015, 130 mins.
Short: Scene 40 (2 mins)
the weird relationship between the patient who can't stop working
and the doctor who wants him to stop.